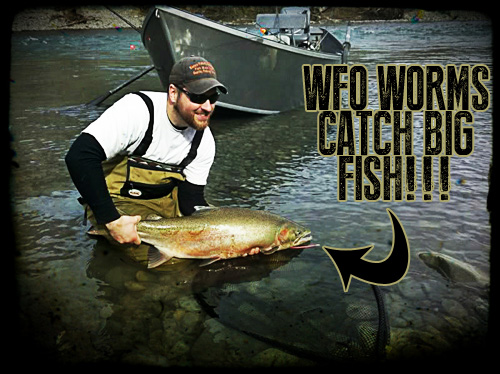 Steelhead worms or as everyone else says “Pink Worms” have become more and more popular these days for steelhead fishing. Why the term pink worm stuck is because that was the primary color that has been used for steelhead since day one. What people have failed to realize is that steelhead will hit many different colors of worms if presented correctly. There is many ways to fish worms for steelhead, but lets talk about one in particular.

Float fishing with a worm is my go to presentation in all water conditions. This tactic can be insanely deadly and can often provoke strikes from some the the biggest steelhead swimming in your local waters. Plastic worms have been one of the most deadly baits to hit the fishing scene since they trickled down from Canada years ago. Fishing them under a float is pretty easy and doesn’t require much skill for rigging. Get some owner painted jig heads. I prefer pearl white or pearl pink. You can find them by clicking here. Next your going to need to get some worms, I prefer pink worms but all colors have been known to be effective, some of the favorites are OP Nightmare, Clearwater Orange, and Hot Steel. Now that you have your jig heads and worms time to rig them together. Start by inserting the hook into the head of the worm put it in about a one inch then poke it out center body so the worm is straight on the jig head. Once you have your worm on the jig head you can tye it to your line just as you would any other jig.Worm fishing under a float has to be one of your go to presentations when out on the river, especially in March when the big boys are around.